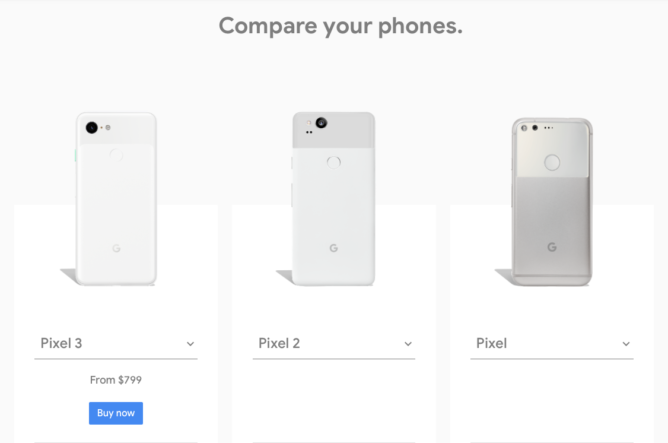 Google has stopped selling its Pixel 2 and Pixel 2 XL smartphones. As noticed by Android Police, URLs for the Pixel 2 at the company’s store now simply take users to the newer Pixel 3 instead. Some stock remains available from other retailers. Verizon, the Pixel 2’s exclusive US carrier, ended sales of the smaller device back in October upon the announcement of its successor. However, Verizon continues to offer the Pixel 2 XL as of now at full retail pricing, which is not at all a good deal.

The Pixel 2 and 2 XL were announced in October 2017 and went on sale later that month. Google ran into controversy with the larger phone’s display, which some found to have dull colors when the device first shipped. Google said it was going for color accuracy over vibrancy, but the company later fine-tuned the screen with software updates that let users choose more saturation.

As for the smaller Pixel 2, it was a pretty great smallish Android phone if you could put up with its bezels and average battery life. The camera system was the same in both phones and produced fantastic images. The Pixel 2 and 2 XL still hold up and compete with many 2018 and 2019 flagships in that regard. Both phones will be receiving Android Q this summer.


By moving the Pixel 2 off its store, Google now shifts all of its focus to the Pixel 3 and 3 XL. The company has been slashing prices on those phones by up to $200 of late to boost midcycle sales. And we’ve still yet to hear anything regarding the oft-rumored and heavily leaked “lite” versions of the Pixel 3, which have already passed through the Federal Communications Commission in preparation for a release expected within the next couple months.