Google was born with a mistake

“Even if they go to the end, Bangladesh will score a goal,” said a fan who stood by and watched the match with excitement after the goal in the ninth minute of the match.

In fact, you can’t sit and watch the match of Bangladesh national football team with high hopes. When you see a good pass or a goal, the dream kite starts flying. But it doesn’t take long to be hungry for that dream like a spinning kite.

In the end, the fear of that fan came true. The match ended in a 1-1 draw as they digested the last goal against Nepal. And this is the farewell of Bangladesh from the SAF Football Championship. Nepal reached the final for the first time in the draw.

After losing to Sri Lanka in the first match, Bangladesh drew with India in the second match with 10 players. The dream of the final did not go away even though the Maldives pushed the flying Bangladesh in the middle. After 16 years, Bangladesh needed an inevitable victory to reach another final. Sumon Raza’s goal also matched her fragrance. After many years, Bangladesh will play in another clear final, this dream was also seen by many. But it did not happen. 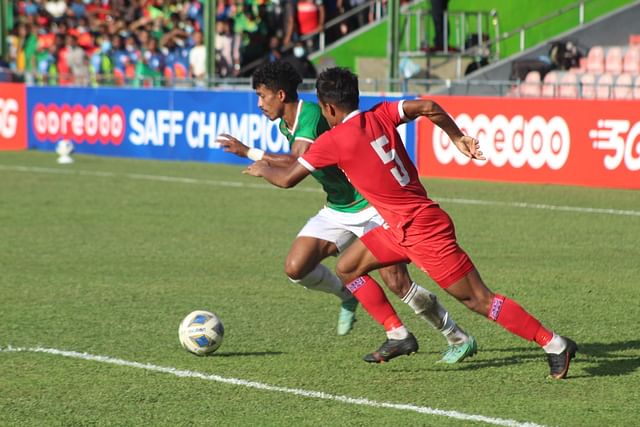 Before reaching the final, two issues are coming up as reasons for leaving. Firstly, Bangladesh goalkeeper Anisur Rahman was shown a red card in the 69th minute and secondly, a penalty decision against Bangladesh. The red card that can be seen in this way, many people might not believe if they did not see the game of Bangladesh! Anisur’s red card can also be called the compensation of the foolishness of Bangladesh forward Rakib Hossain.

Rakib had the ball in the middle of the field. There was no pressure on him. Dulki rice floats in the air and passes back to the defense. Such a ball will come, he may not have been mentally prepared by two center backs Tapu Barman and Tutul Hossain Badshah.

Navajug Shrestha ran out from behind and took possession of the ball. Unable to find a way out, Anisur came out of the box and tried to stop the new age. The result is a red card. After such a back pass, questions have been raised about Rakib’s football knowledge. Could be wrong, so say that cold head pass!

Nepal got a penalty in 6 minutes. Anjan Bista got stuck in the box while trying to head. The Uzbek referee showed a yellow card to Bangladesh defender Bishwanath Ghosh with a penalty whistle. But Bishwanath claims he was not on the scene.

Watching the TV replay didn’t make it seem like a fair penalty. That is the debate. Anjan made no mistake in catching the ball from the spot kick in the 8th minute. This is the dream of Bangladesh.